About Us | The Martin House CAC

The children’s advocacy center model originated in 1983 by then-District Attorney Bud Cramer in Huntsville, Alabama. Recognizing that child victims were being re-victimized by the very system that was supposed to protect them, Cramer led a group of front line workers from CPS and law enforcement agencies, nurses, mental health providers, and others to establish the first Children's Advocacy Center in 1985. Today, the Huntsville center is the National Children's Advocacy Center and serves as a model and resource for advocacy centers across the country. Bud Cramer went on to serve as a US Congressman where he continued to fight for children until his retirement in 2008.

Amarillo is the proud home of the first CAC in Texas when The Bridge Children’s Advocacy Center opened its doors in 1990. Since then, communities all across the state have established multidisciplinary teams to investigate, prosecute, and provide intervention for abuse victims and their non-offending family members.

In 1998, leaders in both Gregg and Harrison counties began educating their communities regarding the need for a children’s advocacy center. East Texas CASA contacted Children’s Advocacy Centers of Texas, the membership association for CACs in Texas, and the process of starting a CAC in our community began.

The Children’s Advocacy Center of East Texas (CACET) was established in a little gray house on College Street in Longview and children received forensic interviews beginning in June 2000. At the time, the CAC had one employee, a Program Director, who quickly hired a Child Advocate to help ensure the children and their families received services so vital to their healing process. CACET began to coordinate the efforts of the professional teams who investigate, prosecute, and facilitate healing in both counties. The teams included representatives from area law enforcement, the District Attorney’s Office, Child Protective Services, and local medical and mental health professionals.

In the summer of 2008 the ETCA board voted to separate CAC of East Texas from the umbrella organization. A committee was formed to begin the process of the legal separation. In the summer of 2009 a new board of directors was formed and The Martin House Children’s Advocacy Center of Gregg and Harrison Counties was established and moved to 606 West Garfield Drive in Longview.

In 2014 the board of directors voted to add Marion County to its official service area and changed the name of the organization to The Martin House Children's Advocacy Center. To better support the multidisciplinary teams and families from Harrison and Marion Counties, a CAC satellite office was established in the Carlile Building in Marshall in September 2015.

The Martin House Children's Advocacy Center is the result of a remarkable collaboration and coalition of dedicated individuals and agencies which serves more than 600 children and their families each year. This partnership, combined with a generous outpouring of community support, has made the center a reality and children a priority. The center is one of 70 CACs in Texas and more than 800 across the U.S. dedicated to protecting our most vulnerable citizens: our children. 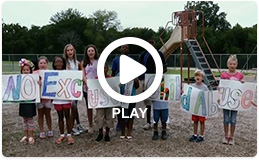